Dr. Marius Geanta, the host and president of the Centre for Innovation in Medicine talks to Dr. Stephen K. Klasko, former President and Chief Executive Officer of Thomas Jefferson University and Jefferson Health and one of the most illustrious advocates for transformation in healthcare and the use of technological and social innovations for improving population health.

The title of the podcast is “Jefferson Health System” because it’s not just about health, it’s about transformation, education, vision, and the ability to think differently. In Stephen Klasko’s opinion, you should always start with a vision.

I love the word rethink and reimagine and rethink all the time because we can’t make incremental changes in health care. I had three Aha! Moments in the beginning. I started my career as a practicing obstetrician and back in the 80’, 97% of obstetricians in the United States were male. The most performed procedure in the country was a hysterectomy, followed by C-section. I hadn’t done anything academic at that point. I happened to be at a lecture by some old guy, probably my age now, I was only 30. And he said to the medical students that if you see a small fiber in the uterus, just take out the uterus because the woman doesn’t need it.

And then, I happened to be at Barnes & Noble (a bookstore), and the top ten nonfiction bestsellers were Hysterectomy Hoax – How Hysterectomy Ruined My Life. So I realized what we were teaching these kids was based on the past.
So then fast forward to the nineties. All doctors are complaining about the business of health care. And I said, look, I can deliver a baby. I could probably figure out the business. I got my MBA award and a $1,000,000 grant to look at what makes doctors different and how we handle change and recognize that we need to educate and select doctors differently, not just based on memorizing the Krebs cycle, but being ready for the future.

And the last Aha! was when I got to lead the Digital Health Initiative for Apple in pre iPhone era. Apple was a small computer company with 3% of the computer market and 4% of the operations. The Dell Gateway and Microsoft were the Kings. And if you asked any of those folks what’s going to be like in 2022, they talked about Windows 2025.
But Steve Jobs recognized that the whole piece was getting commoditized, the computers and operating systems. I didn’t want to spend the next ten years just incrementally changing. I wanted to create a digital lifestyle. So that’s what I took to health care.

Innovation in breast cancers: what is the role of tumor microenvironment and fibroblasts? 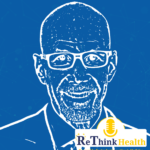